I rode for 30 minutes on the Cybex upright using the heart rate monitor program at 130 bpm for a total of 8.31 miles.

While the workout was definitely easier than what I've been doing previously, I think that it is still definitely challenging enough to force my body to adapt and get stronger. I plan to keep the intensity lower for the indefinite future, possibly all the way through this season.

I am definitely tired.

I not only adjusted the masters swim, I also cut it short.

I backed down the run to an easy pace. I think my heart rate was in the upper 120's. I ran 50 laps in 30 minutes for an average pace of 9:36. This was much more enjoyable and exactly what I need.

I'm going to bring my bike workouts down to a heart rate of 130. I'm going to do an easier swim workout on Friday.

I did a "free" run for one hour. Today the weather was absolutely gorgeous.

I don't have any idea what my total mileage was. I looped out quite a bit too far and had a decent walk back home at the end (from Kipling and Jewell).

I still don't find the run to be enjoyable. It's hard work that requires me to maintain my determination to stick with it.

Unfortunately, it appears that I cleared the stats when I was done doing the ride. But, I do have the accumulated mileage on the computer and doing the math it looks like I rode 31.5 miles. 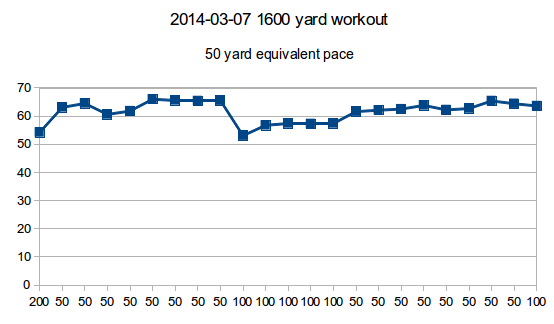 I rode for 30 minutes on the Cybex upright bike using the heart rate program at 135bpm for a total of 8.38 miles. I was surprised that my mileage was greater today than yesterday's mileage because I was talking to somebody while I was riding and I think I maintained a higher cadence. I thought the higher cadence would result in a higher heart rate which would cause the bike to use a lower gear and thus generate a slower speed. I know that in previous workouts it seemed clear that bringing my cadence down somewhat resulted in a higher speed.

I rode the Cybex upright using the heart rate program at 135bpm for 30 minutes and a total of 8.2 miles.

I was feeling tired while I rode to the fitness center and it was a good choice to back down the heart rate. I'm going to keep it at 135bpm for at least a couple weeks I think.

I ran 30 laps in 15.3 minutes, which equates to a pace of about 8:10. I wasn't really aiming for a pace that fast. I probably had my heart rate a little higher than I was planning. I want to bring my heart rate down for the run for the next couple weeks or so.

Today's workout was 60 minutes. I didn't want to run around Kendrick Lake for an hour, so I headed out for an "open" run. Consequently, I don't have any idea what my pace was as I don't know the total distance I ran.

I purchased a Cateye Strada (CC-RD420DW) bike computer yesterday so that I could do the workout on the rollers today. It measures Speed, Cadence and Heart Rate.

Today's workout was 90 minutes in Zone 2. I wasn't sure how it was going to go. I haven't ridden the rollers in close to ten years. Fortunately, I was able to get used to them very quickly. I did use my "training wheel" setup of having the bike repair stand on one side of me and another sturdy object on the other. Also, I wore my gym shoes instead of my cycling shoes.